Federalizing Guards Will Not Improve Security at Federal Buildings. FCGOA FPS NEWS 2010-09-21 1:49 AM
What is needed to improve FPS security is better training, management, oversight and administration, including additional resources to hire more inspectors and contracting officer’s technical representatives. (text/html)

Koran Burning versus Real Patriotism Devil's Advocate 2010-09-14 11:58 PM
Any fanatic can burn a book, or a flag, because it doesn’t require rational explanation. But anyone with the brain of a troglodyte could appreciate there is complexity to the reality of most religions and belief systems. Once again high-minded religion plays its hand in the human affairs of politics, as Jones also sees the trumped up Muslim Mosque controversy, to be built close to ground zero, as seriously provocation. But real patriotism includes having a willing to seek out the truth. (text/plain)

BDS Israel: The decade in reviewAuthor Divest this 2010-08-16 5:24 PM
I thought it might be useful to summarize the progress of the BDS movement since it began a decade ago. Because so much of the BDS project is based on words, including competing claims of success and failure, I thought it best to provide a summary based primarily on numbers which (as I recall from my business days) are the only things that tend to get preserved as information travels up or through an organization. (text/plain)

A Open Letter to UGSOA Locals From Michael Hough on Why He Resigned From UGSOA UGSOA NEWS 2010-08-14 9:09 PM
Former UGSOA Vice President Speaks Out Against UGSOA" I feel that the organization (UGSOA) has Lost Focus on its Purpose". (text/html) 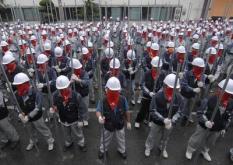 "The wind from above assumes its old forms of arrogance and haughtiness. The police and the Federal Army close ranks around money and corruption. The wind from below once again travels the ravines and valleys; it is beginning to blow strongly. There will be a storm..." -Subcomandante Marcos of the EZLN (image/jpeg + 2 comments)

UGSOA Members Show Their Support For FCGOA and its President Guy James FCGOA NEWS 2010-08-10 6:00 AM
Mr. Harsley’s 12-13 years of serving our membership under UGSOA local # 44 as president has been pure hell. He has abused his power and authority, misused his position, and undercut our benefits with his manipulations by telling un-truths in order to accomplish his goals by deceiving the officers into accept his untruths. It’s time to replace Mr. Harsley, UGSOA Local # 44 and UGSOA international with a new and more progressive, honest, user friendly, officer oriented organization that serves the union membership needs, not their own needs, wants and desires. (text/html)

Billionaires and Vivisection or Inflicting Pain on Captive Animals Analyst 2010-08-06 4:44 PM
While Gates and Buffett ostensibly work to increase charitable giving by the wealthiest Americans, the recipients are often animal torturers. Gates Buffett And Other Billionaire Giving is Primarily to Animal Research (text/plain)

W Bush's,Barack Obama's Mass Murderer Robert Gates Says Wikileaks Has 'Blood On Its Hands' Tony Ryals 2010-08-01 5:04 AM
If anyone can prove that WikiLeaks' founder Julian Assange HAS EVER SHAKEN HANDS WITH EITHER BARACK OSAMA OBAMA OR HIS AND W BUSH'S SECRETARY OF WAR FRAUD ROBERT GATES,THEN HE SHOULD LOOK CLOSELY - THERE MAY LITERALLY BE BLOOD ON HIS HANDS JUST AS GATES CLAIMS ! (text/plain)

Wkileaks founder 'dissapointed' in Gates General Joe and AP 2010-08-01 1:05 AM
"Secretary Gates could have used his time, as other nations have done, to announce a broad inquiry into these killings," the statement said. "He could have announced specific criminal investigations into the deaths we have exposed. He could have announced a panel to hear the heartfelt dissent of U.S. soldiers, who know this war from the ground. He could have apologized to the Afghani people. "But he did none of these things. He decided to treat these issues and the countries affected by them with contempt. Instead of explaining how he would address these issues, he decided to announce how he would suppress them. "This behavior is unacceptable. We will not be suppressed. We will continue to expose abuses by this administration and others." (text/plain)

poster for bike for the gulf Malik Rahim and friends bike from new orleans to Washinton DC july 15 to sept. 15, biking along the east coast shores. for restoration of the gulf (image/jpeg + 1 comment)

Over 300 UGSOA Officers Working at The DOJ and ICE Facilites are Revolting Against UGSOA UGSOA Washington D.C. News 2010-07-11 7:34 PM
The revolt by these 300 UGSOA members to join FCGOA is just the tip of the iceberg as Hundreds of UGSOA all Over the Country are Signing up with FCGOA. (text/html)

We're Getting Ready for Tour Conspiracy Tour 2010-07-10 5:51 PM
The first We're Getting Ready video launched an investigation into the RNC Welcoming Committee, culminating in conspiracy charges against the RNC 8. The raids in that case directly led to the investigation and prosecution of Scott DeMuth. They both led to Conspiracy Tour 2010. We're still getting ready! (text/plain)

A former member of the Black Panther Party and the Black Liberation Army, Muntaqim is one of the world's longest held political prisoners, having been incarcerated in the United States since 1971. (image/gif)

Blood on the Border Internationalist Group 2010-07-06 4:04 PM
Today in the United States, under the Democratic administration of Barack Obama, xenophobic and racist violence is escalating. The criminal agents of the Border Patrol have reached the point of killing in cold blood, before the eyes of hundreds of witnesses. On May 28, construction worker Anastasio Hernández Rojas was beaten to death by some 20 agents of the U.S. Border Patrol. Then on June 7 in Ciudad Juárez, across the river from El Paso, Border Patrol agents fired into a group of youths on the Mexican side of of the border, murdering 14-year-old Adrián Hernández with a shot to the head. These crimes are part of a policy of racist repression looking for scapegoats, typified by the legalization of xeonophobia and police use of racial profiling in Arizona’s SB 1070 law. But while Obama criticize the law, “Obama, listen, we are in the struggle,” his thugs are killing on the border. It is an illusion to think that the commander in chief of U.S. imperialism, or his counterpart and semi-colonial underling, Mexican president Felipe Calderón, will defend the workers. It is necessary to mobilize the power of the working class to defend immigrants. (text/html)

Dangerous Crossroads in World History: Obama’s New Iran Sanctions: An Act of War Shamus Cooke with General Joe 2010-07-04 9:36 PM
"In fact, war against Japan in WWII was sparked by very similar circumstances. Franklin Delano Roosevelt spearheaded a series of sanctions against Japan, which included the Export Control Act, giving the President the power to prohibit the export of a variety of materials to Japan, including oil. This gave Roosevelt the legal stance he needed to implement an oil embargo, an obvious act of war. Japan’s attack on Pearl Harbor simply brought the war out of the economic realm into the military sphere. Iran is facing the exact same situation. Whereas the Obama Administration calmly portrays economic sanctions as “peaceful” solutions to political problems, they are anything but. The strategy here is to economically attack Iran until it responds militarily, giving the U.S. a fake moral high ground to “defend” itself, since the other side supposedly attacked first." (text/plain)